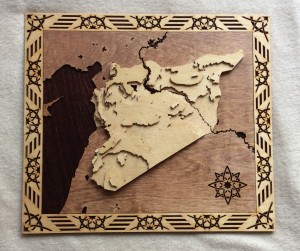 As I was laser-cutting some accessories for a photo shoot (which I’ll be sharing photos from shortly!) I had a brain-wave of the topographical variety–which is unusual for someone who usually works in fabric! Many hours of work, stained fingers, and coats of varnish later this gorgeous map of Syria was born. I don’t want to break down the significance or meaning behind this new piece much as it was a gift to someone very dear to me, but I’m going to elaborate the process somewhat so you can learn from my experience!

First, I sketched out a rough plan for the project. I knew I wanted Syria itself to be a single color, with at least 4-5 layers of topography, but then I had to decide about things like if I wanted the water table to sit on a layer below the landmasses, how I’d differentiate Syria from the surrounding countries, how much detail I wanted to include, etc. 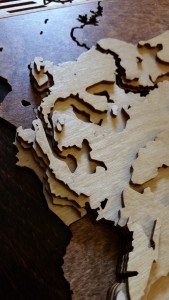 Then I extracted topographical data from Google Maps plus a few other sources, and processed it to create slices of altitude for the Syria map, as well as outlines for the surrounding countries. Sounds simple, but took an insane amount of time to get right as the topographical data is hard to process cleanly. There were certain times I had to just make a judgement call on what would make the most sense and look cohesive, so I may have taken a slight artistic license (with the topography, not the outlines–those are pretty accurate but a little stylized).

Next came the compass rose, and frame which were my custom designs without a reference. I drew a quick compass rose, but ended up not even scanning it as there are certain images I don’t feel are necessary to trace over. Mainly I scan and trace images into a vector object when it’s something extremely intricate and non-mathematical or geometric. These were fairly geometric, so I went ahead and created them straight off in Inkscape looking at my reference drawing. The concept started off as a riff on the mother-of-pearl inlays one often sees in vintage and contemporary Arabic woodworking, but with my own twist.

Once the files were prepped, off to get laser cut! I do my cutting at The Build Shop, and they graciously helped me get the cut settings right. I needed just the right amount of “stick” to make sure I didn’t lose my smaller terrain pieces in the process of transporting them home or removing them from the cutter. I had originally purchased a small quantity of hardwood to experiment with, because this was meant to be a special project, but I ended up going with a pine plywood because the edges seal quite nicely when laser cut. Since the edges of my pieces would be visible, I opted for the more sealed look of the plywood. Unfortunately, plywood has a more variable density than other materials, so I had to cut some pieces free with an x-acto knife rather than being able to just pop them out. Not the end of the world, but a dicey and delicate task (look how thin some of the clearances on the frame are). 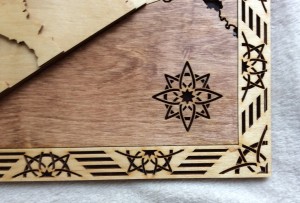 I haven’t done much woodworking since I was a kid in my dad’s home shop, so while I was waiting for my laser cutting appointment to come around, I carefully researched and tested stains and varnishes for my project.  After sanding, I ended up using Minwax conditioner and stains to create a very dark water layer, and just gently increased the contrast on Syria and the frame to bring out the wood grain a tad. The rest of the surrounding terrain was a bit of an issue as I couldn’t find a stain in between the two that I liked, so I ended up mixing a custom one that I believe came out quite nicely. I transferred the N (which shows up darker in person than in photos) above the compass rose by printing onto parchment paper and transferring the image. In my digital file I originally had labels, and planned to hand-letter the map myself in Arabic, but once I had the pieces and gently laid them out in the final 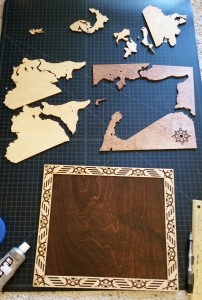 shape, I liked the artistry of the geography without interference so I dropped that idea. Two coats of semi-gloss varnish later and the pieces were ready to be glued!

I assembled the map gently and slowly by hand with E6000, but I can imagine wood glue would work fine–I just always have E6000 on hand and trust it to get the job done. Once I got to the smaller pieces of the map, I filled a glue syringe and continued onward using the syringe to make small beads of glue that wouldn’t show more than necessary. For the smallest pieces, I laid down a dot of glue on the underlying piece and used a damp Q-tip to pick up the top piece and place it.

There you have it! A gorgeous, meaningful project that I’m rather proud of. Makes me miss traveling! 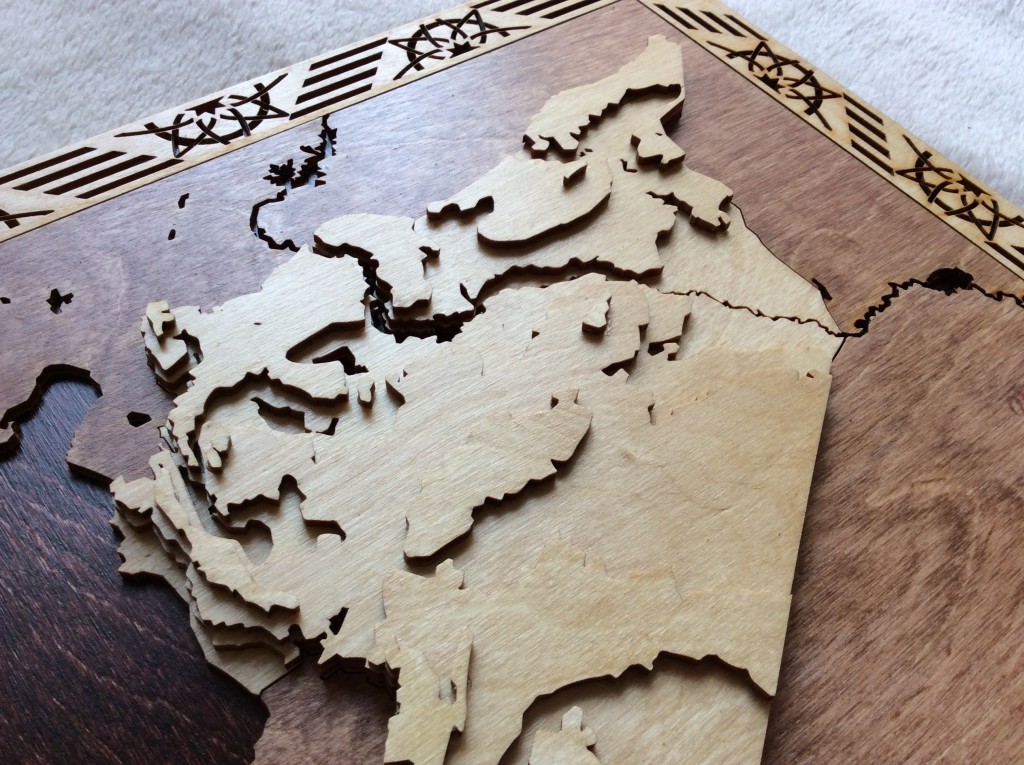