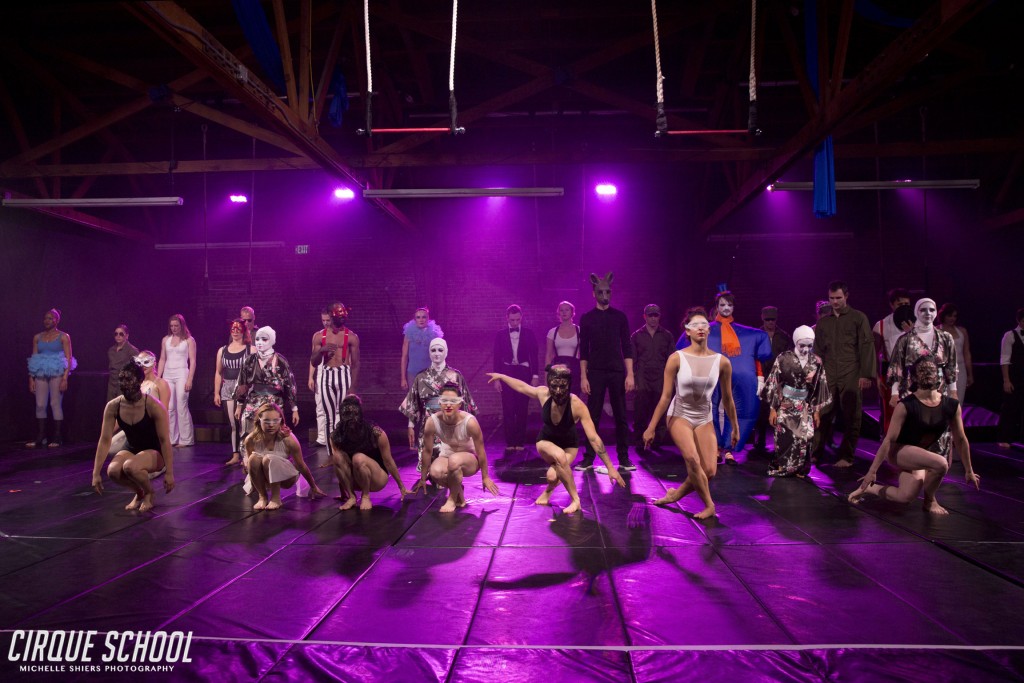 (Photos by Michelle Shiers, courtesy of her and Cirque School LA, used with permission) 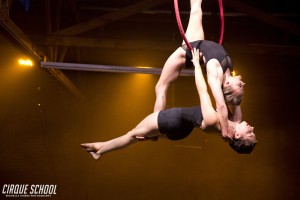 Tucked away down a gated alley in Hollywood lies the portal to a world where humans fly, bend, and tumble to jaw-dropping effect. The circus hasn’t just come to town–it has taken up residence and acquired quite the following! Cirque School LA isn’t exactly unknown in the rapidly-growing circus industry, but for your average person out and about in LA, I consider it a precious hidden gem. Their student showcases, produced by owners Rex Camphuis and Aloysia Gavre, are the prime opportunity for the outside world to enter in to the world of us circus trainees, and witness amazing performances from folks in their community. As a Cirque School student, I of course attended their latest offering which ran for three nights last month: Tableaux. 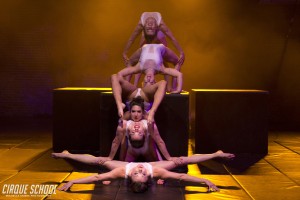 ‘Student Showcase’ is a phrase that may conjure up visions of beaming parents recording their child’s first ballet performance, but Cirque School’s showcases are another story. “Showcases are a fully produced show,” one of my fellow trainees, JJ Bloom explains, “it’s different than a student recital. There is an audition process, and not everyone is eligible to participate, so the performers you see are high-level amateurs.” Indeed, from the moment the lights came up, the quality was evident in all aspects of the show, from production to choreography.

Tableaux featured many of the diverse specialties that make Cirque School a destination for circus devotees: Aerial on rope, trapeze, straps, silks, and lyra, plus a good helping of contortion and a healthy dash of spices like clowning and tightrope. The show gave a wonderful tour through all these skills with different stories and vignettes which created a sense of granular narratives woven together under a larger thematic umbrella. The mood of the show sauntered from eerie, to playful, and even emotionally moving without losing a sense of central identity or momentum. Besides the excellence of the production, the performers’ level of skill made for incredible entertainment. There’s no doubt Cirque School is producing extremely talented performers who are a joy to watch. Seriously, these folks could perform in paper bags on the street and still draw a crowd! 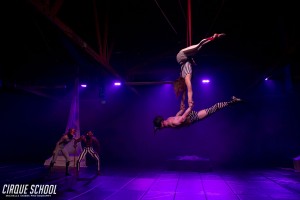 A unique feature of this show was the focus on group choreography, whereas previous showcases have been “cabaret style” with solo acts one after another. “Having a full ensemble involved resulted in lots of people’s ideas and creativity contributing to the final product,” said JJ, which can be a tough situation to balance, but Tableaux delivered a cast truly working in concert under Aloysia Gavre’s guidance. For performers who may not have much experience in group shows, I was impressed by the cast’s ability to stay together not just in their choreography, but also in acting and communicating a story. The ensemble style also allowed for more dynamic choreography, and I found the times when there were solos or concurrent smaller groups to be reassuringly well-balanced and clear. There was no muddiness or moments of wondering where to look. Not only that, but the cast deserves credit for being their own crew, flying in and out equipment, changing sets, and so forth in between performances and costume changes. 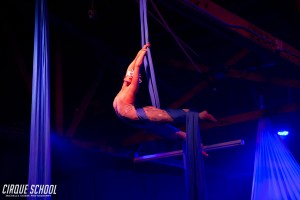 While this wasn’t a professional show in a theater, Tableaux was hands-down the most engaging, high-quality and well-produced student show I’ve seen. This isn’t one of those events where the audience is filled with reluctant, coerced friends–I’m sure there are a few, but they come out raving that they’re just so glad so-and-so talked them into coming. I was entirely drawn in by Tableaux, and despite some small hiccups (circus arts can be unpredictable when working in the air or pushing the body to it’s limits, so I expected a few) it was a very smoothly executed presentation. Considering the $15 price tag per ticket, attending is a bargain for such a wonderful show, and to support the arts in your community. In fact, the student performers are a mish-mash of folks you run into everyday: Moms and dads, lawyers, students, doctors, bloggers, and dancers all come to Cirque School to create and share the magic of circus arts.

Sound good, and want to catch the next one? Connect with Cirque School LA at CirqueSchoolLA.com and on Facebook, or follow me on Instagram at @OhNoDina as you can bet I’ll be posting about the next showcase when it comes up!